Travel day comes along much too early.   Regardless of how early you may get in the bed, eager to rest your weary bones before a day of travel, the time to arise and begin the excursion comes much too early.   For me, travel day is the most exhausting day in the world, beating out the days when my children were born.   I typically set 3 alarms; my ancient clock radio, my cell phone, and either a battery operated clock or one that you wind up.   I have this immense fear of missing a flight, so I always have a back up and a back up for my back up, but even then I don’t sleep well.   I’m still too nervous that all of my alarms will fail.

So, needless to say, Wednesday, June 22nd, I was wide awake at 3 am, 45 minutes prior to my alarm clocks going off.   My children and I had a 6 am flight to make our annual two week summer vacation in Rochester with my in-laws.   Instead of dilly dallying, I got up, made an extra strong cup of coffee, and began getting dressed.   Our plan was to leave at 4:30 so as to get to the airport by 5 am, we actually ended up leaving at 4:15, with the bright moonlight illuminating the road ahead and a 5 Hour Energy in my system.

This is my second time flying solo with my boys.   This year also marks the first time in which we have to pay for Henry to fly, meaning he gets his own seat.   It’s also the first time we haven’t flown Southwest (since they’ve decided to cancel their flights from Greenville to Rochester).  United won out on the bidding wars of flying.  So, we were navigating new territories, or perhaps some just a bit unfamiliar.

I’d quizzed all my Facebook friends (my measly 300) and inquired about the wait times for TSA which I’d seen on the news over the past couple of months.   People were missing flights, lines were atrocious.   While I’ve never had a problem with security in Greenville/Spartanburg, I still asked if anyone else had experienced long delays.   With a 6 am flight on Wednesday, on a non-holiday, I was told by everyone it should be pretty easy.   So, we arrive at the airport to check in at 5 and I’m told we had just made the cut off.  What?  Surely this woman was jesting.  Nope! The boys and I stood in an almost 45 minute line at TSA security and we were one of the last ones to board our flight.   This should have been an omen.   I should have heeded the signs that this was not going to be as I had hoped it would be.

We were not the last ones to  get on the plane, about 8 more people followed, and as I’m getting the boys seated and ready to go, iPads queued up with movies, coloring books and crayons at the ready, my darling oldest, the one who made me a mother, the apple of my eye, sees a rather well endowed woman in the physical weight arena and shouts out, “Mom, have you ever seen a lady so BIG?”

My mouth dropped open.  I could feel the stares of all of my fellow passengers, some I know were chuckling, others were mentally scolding me for not enforcing that age old rule from my parent’s generation, “children are to be seen and not heard.”   As the lady got closer, I felt the sharp knives of her contempt stabbing my body.   I did my best to diffuse the situation by explaining to my son that everyone seems large to him because he’s a little guy.  You know, the whole relativity/perception thing.   That didn’t work.   “Everyone’s not THAT big, mom.”  I smiled at the faces around me and buckled in for what I was sure was to be a torturous ride.   There would be no escape, but if this were the least of my problems, then I would survive.  Problem was, it wasn’t the least of my problems.

As we taxied down the runway to take flight, I caught a distinct whiff of poop, and since I was pretty certain that no one would have crapped themselves, I knew it had to be my sweet little Henry who had chosen NOW as the time to have a movement.   At least it was in his diaper and once we were in the air, I could go to the bathroom and change him, or so I thought.

The engines on the plane opened up to full throttle and we began speeding down the runway as Henry decided to reach his hand in his pants, and pull it back out, covered in pooped!   I frantically looked around me, eager to find something to wipe his hand with, but the only thing I could find was a vomit bag and before I could use it, my sweet little angel, decided to wipe his hand on the seat back in front of him! 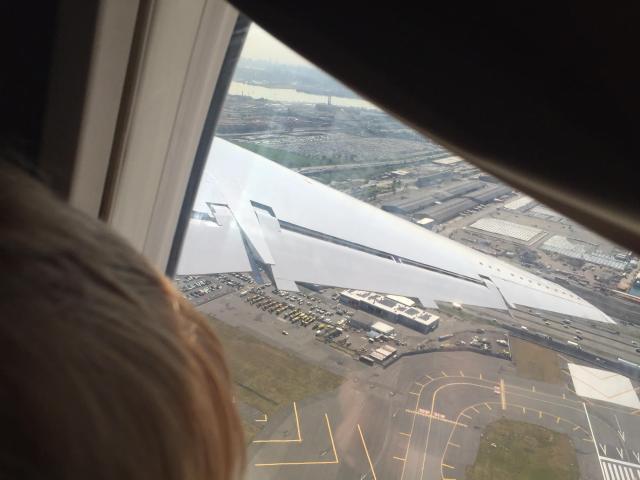 The seconds ticked by slowly as I kept trying to bide my time for when I could unbuckle and haul my child into the bathroom to change him.  After what felt like an eternity, we were at a safe cruising altitude and the seat belt sign went off.  In one swoop, I grabbed the diaper bag and my child, tried to divert my eyes from the offended large lady as she humpfed at me, and went to the lavatory that is smaller than the size of our coat closet (which can hold about 10 coats).   Imagine being inside a Pringles can and attempting to change the diaper of a 35 pound 2 year old.   And what’s worse, the poop had leaked out onto his shorts.   So, from that point forward, for the rest of our travel experience, my son would be walking around in his diaper.

So, three things had happened…the long delay at TSA, my vocally observant 4 year old, and my pooping 2 year old.   They say everything happens in threes.   Surely, I was out of the woods, right?   One would think! 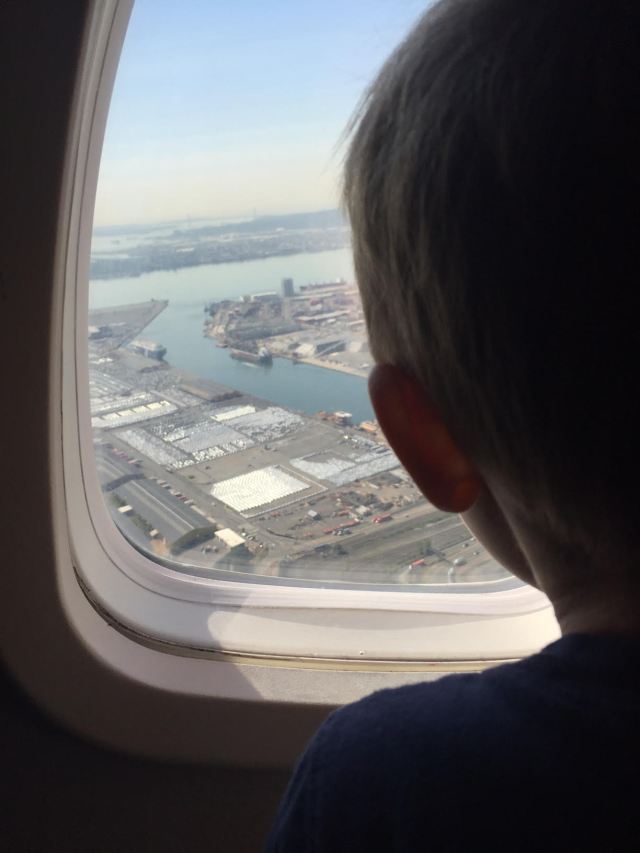 After arriving in Newark, and just as we were attempting to board the last leg of our journey, I was stopped by the ticketing agent at the gate who inquired as to if Henry was a lap child.  I pointed out the ticket she was holding in his name and at that point she asked if he didn’t have any pants because United requires ALL passengers with a seat to wear pants.   Excuse me?   No! He didn’t have pants, he had soiled them.   To this she asked, “well, aren’t you prepared for instances like this?”  No I was not prepared because the last time Henry had done something to this magnitude, he was 6 months old!   She held the tickets for a minute, looked down at my boys, smiled at them, then looked back at me and frowned as if to shame me for being unprepared, and finally let me on board.

I see people flying with children all the time.  It seems to be flawless, but it never is with me.   Why is that?   The only good side to our flight was that we made it into Rochester a half an hour early.   That’s 30 minutes less of being inside a tin tube with my children and no escape.

Next week, we fly the friendly skies back home.   This time daddy will be along for the journey, whose patience is quite a few levels lower than mine.