It keeps popping up and not just once, but numerous instances.   And it’s not just one day, it’s each day that it’s posted on my calendar. And it’s not just one calendar, it’s numerous calendars, but they are inextricably linked together, so to make the change is really a simple fix. It is just one click. It’s painless, not at all time consuming, and I’ll be able to move on with life in this era of “new normal”, but I don’t do it.   I don’t bother to make the change, I just see them and then I dismiss them, allowing for the reminder to still nag at me each time.   I don’t know why I don’t just go in and cancel every sports practice, every afterschool enrichment activity, every church event, every camping trip, every concert, every event that was on my calendar before this age of social distancing.   When they come up, I often say to myself, “Amy, you should just cancel these,” but I don’t.   It’s like I want that constant reminder of what we WOULD have been doing as a family.   It’s like I want to have that incessant sick feeling of disappointment at all the opportunities my boys could have had.   The most recent disappointment: Dabo Swinney Football Clinic.

As I’m typing this blog, I just received the reminder about what would have been flag football practice tonight for my boys.   I see it right now. It’s staring at me, menacingly, almost as if it’s laughing at me.   That’s not possible, I’m aware, but I still feel it all the same.

My husband and I were discussing this last night.   Life has gotten a little bit easier with the country’s stay at home order, at least for us.   I’m blessed to work for a company that allows me to work remotely. My children have access to everything they need for school.   We’re not rushed every morning to run out the door, breakfasts half eaten, and a house in complete disarray.   We’re not eating through our lunch breaks at work, so that we can leave work 30 minutes early in order to get the boys picked up from school and fed before all of their extracurricular activities.   We have the time to just slow down and enjoy life, to breathe, to have dinner as a family EVERY. SINGLE. NIGHT.   My husband plays football with the boys every night after dinner until it gets dark. We have family movie nights on the weekends on the big screen and projector outside.   Our house is the most put together it’s been since before we had children.   For the most part, this is actually working for us, but I would be lying if I said I didn’t miss our life before.

For the most part, my husband and I do well with social distancing.   We’re not as extroverted as others and don’t crave social interaction as often.   We miss our friends.   We miss our cook outs with groups of friends.   We miss our date nights, but we’re making it.   Still, in spite of the fact that we’re doing well right now, I still want those calendar pop ups to remain. I want those reminders of what we could have had.   Perhaps it’s my self-deprecating personality? Perhaps I’m nostalgic? Who knows, but oops, look a there…another pop up reminder has just flashed across my screen. I hit the accept button and continue with daily life, not bothering to just delete it altogether.

One day this mentality will change for me, but for now we are getting by.

Enjoying a Zac Brown Band concert in the backyard. 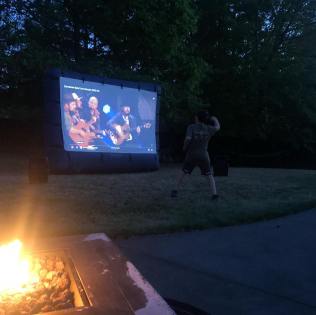 Doing our best to replace the missed concert experience with a pre-recorded Zac Brown Band concert in the backyard.

The bags full of colorful plastic blocks lay disregarded on the floor.   Having been emptied of what makes them essential, they withered into nothingness, my children kicking them across the floor, even crumpling them underneath their feet.   I snatched them up from the floor as my husband sat at the kitchen table with our children, relentlessly working to put together the Lego Voltron my husband had bought for himself to celebrate his 41st birthday. It was his time with the boys and they loved doing things like this with dad, so I let them be.   As I continued to pick up the bags, the conversation between father and spawns, more specifically Spawn 1 caught my attention.

“Dad, do you know Ball State?” he asked his fingers methodically putting together the yellow lion of Voltron’s arm. “Is that a real name?”

I continued picking up the kitchen as the conversation went on.

“Well, don’t you think that’s a weird name ‘Ball State’?” Spawn #1 said again and at this point the youngest spawn, at 6 years of age, started chanting, “ball, ball, ball, ball” as he continued putting together his portion of Voltron.

“No, not really,” my husband replied. “Where did you hear this from?”

“On my Madden game, they were talking about one of the Carolina Panthers players went to Ball State and I just thought that was a weird name.”

Of course, I thought this was just mindless chit-chat between father and son, you know inquisitive little minds wanting to know everything.   They remained quiet for a few moments before my oldest spawn continued on.

“Well, it’s a good thing that it’s not called Balls State, because that would be embarrassing don’t you think, dad? To say, ‘hey, I go to Balls State,’ you know what I’m saying. Right, dad? You know balls?” he said as he started giggling.

I stopped for a moment and stifled my own laugh until the youngest one started saying, “balls, balls, balls, balls,” all the while laughing himself.   He actually turned it into a sort of singsong.

I couldn’t help myself and neither could my husband.   We both laughed as we tried to quell the incessant “balls, balls, balls,” comments from the youngest one.

Within a few minutes, we’d had our deep belly laughs, the ones that hurt and make it difficult to catch your breath.   The boys and my husband continued on with putting Voltron together, piece by plastic piece.

Boys…it’s never a dull minute with either one of them, and the constant turning of wheels inside their brains…well, I never underestimate what exactly they’re thinking.