Who remembers the days of going to the pool, waterpark, lake, or beach and all you needed was a towel, your sunscreen, and a good book?  Hey, I remember those days.  They’re not so far gone that my boys haven’t completely obliterated the memory and feeling of being solo.   I can still see those days, they’re hazy, but not so distant.  Sometimes I think I can reach out to touch them, but when I do they’re completely wiped away.

These days I have a love/hate relationship with the pool and the waterpark and even the beach.   Our first summer at the beach as a family, Davey was just 9 months old.  I can remember my husband asking me to bring his book down to the beach so he could relax and read.  I laughed at him hysterically.  I mean I literally laughed at him like I was some crazy haired, wild eyed, nut case who should be locked up in an insane asylum, straight jacket and all.  Sorry, sweetheart, there’s no relaxing with a kid in tow.

Last week, the boys and I spent two days on the water.  The first was at Otter Creek waterpark here in North Greenville.  We went on a Thursday afternoon which I had hoped would mean it was less crowded, but it’s summer…it’s ALWAYS going to be crowded.   Kids these days are privileged during the summer, with camps and programs, and accredited day care.  My brother and I had some old lady who watched us in her house.  The closest thing we got to a water park, was a blue piece of tarp, with a hose and running water on it.  We actually used an actual tire to slide down the hill in Mrs. Powell’s back yard.  Ah, memories.

Kids frown on you if you offer up something like that now.  Well older kids, who are raised by my generation (Generation X) do.  They have a sense of entitlement and a need to deserve nothing less than the best.  Someone needs to slap those kids silly or maybe their parents.  Of course, I’m one of those parents as I took my kids to a waterpark.

My original intent had been to go for the day, but I seemed to underestimate the physical cost to my body.   I forgot that Henry must run free, he can’t be contained, and he doesn’t meet a stranger.  I actually helicoptered over him, but let Davey have a bit more freedom.   We ended up spending just three hours there.  My plantar fasciitis started kicking in (or that’s what I told myself and my kids), but really it was getting close to closing time. 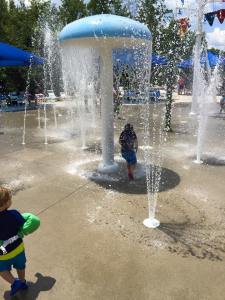 But here’s the thing, for those three hours that we spent at the water park, it took me an hour to get everything, including the boys, ready.  So the opportunity cost of going to the water park really meant less time of playing in said water park, as opposed to just sticking the kids out in the back yard with a good ole fashioned hose pipe, a blue tarp, and a kiddie pool.  My boys are pretty smart and creative.   I’m sure we could have had the water pouring down the slide at their club house and into the huge kiddie pool.   That’s like having your own personal water park in the backyard!  Why didn’t I think of that before?  Because my kids have sucked me of all brain cells.

All joking aside, these three hours at the water park, only cost me $11.  That was my cost to enter.  Thankfully, Henry is still free and I had a coupon for Davey.  Outside food and drinks are discouraged, but since they don’t inspect bags I was able to “movie theater” it and bring in my own drinks and snacks so as to not have my wallet assaulted by the concessions.

My boys enjoyed themselves.  Henry suffered a few battle scars from running and falling and Davey proved to me that he’s capable of diving and can indeed swim without a life jacket.  The other perk?  They both went to bed early and slept like babies.