Flying can be stressful.   Once upon a time, flying was a luxury, something people looked forward to.   Airplanes were more spacious, flight attendants (stewardesses) were a lot more friendly, and the overall demeanor of most of your fellow passengers was more mellow.   Back then, flying was exciting.  It wasn’t just a way to get from one place to another quicker, but to also do it with a twist of relaxation.   I wish I’d known those days.  Perhaps those days didn’t exist, but instead have been sketched upon my brain with the quick flick of my imagination.

These days, flying can be down right treacherous, exhausting, and if you’re flying solo with a 3 &1/2 year old and an 18 month old, both boys by the way, then it can test even the strongest of wills and turn you into a raging alcoholic.   Okay, so the raging alcoholic bit can be a little much.  I think drinking would have made my situation much worse as it would have only allowed me to be numb the pain, while forcing my fellow passengers to endure my screaming and fighting boys.

Neither child suffers from air pressure and popping ears.   Instead they suffer from containment and much like a caged animal who’s been taunted, teased, and can see “freedom” just on the other side of the seat, they’re ready to pounce and scream their way to said freedom.

This isn’t the first time either one of my boys have flown.  Davey has flown three times a year since he was two months old.   If you calculate that with each trip we’ve made to Rochester, NY, he’s been on a total of 44 flights.   He’s more of a frequent flyer than I am.   This is Henry’s third trip up north so his frequent flyer status is still fairly new, equating to 12 flights.  These boys are accustomed to flying, but they’d prefer to have the entire plane to themselves, as I’m sure the rest of the passengers would to. 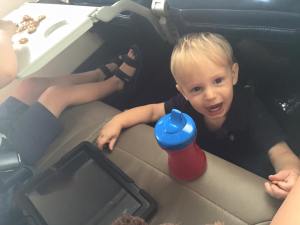 When I first flew with Davey, I prayed that the other passengers would have sympathy for me.   I hoped they would be understanding and that they wouldn’t be like me pre-baby.  I loathed flying on a plane when kids were on board.  I did everything in my power to get a seat as far away as possible.   I silently threw insults at the parents, cursed them for bringing their spawn(s) on board.  I wanted them to suffer.   Now, I suppose karma is coming back to bite me, as I’m now the one who suffers.

These days, Henry is more of my problem than Davey.  Davey will watch a movie on the iPad or look out the window.  Henry wants to scream, kick the seats in front of us, torture his brother, climb under the seats, and basically cause an all out war.  I want to knock him out, to force him to sleep.   I want to have enough money to buy the passengers a round of drinks, in the hopes that they won’t get too upset.   I suppose the best thing, though, is to not have the brilliant idea to fly solo with these two heathens.

I’ve never prayed so much for a plane to land as I did on the flight to Rochester this time.  I tried to will it with my entire strength, my mind power, to fly at super sonic speed so that I could escape my confined hell.  Looking back on it now, almost a week later, I think, “what was I so worried about?”   But those 65 minutes of flight time felt like nonstop 65 days.   I could feel the hairs in my head starting to gray, but in the end I survived.   I just look forward to the day when I can put the two of them on a flight WITHOUT me.   In the meantime, Daddy will be on board for the next flights.   I think I may sit 20 rows away from him and the boys, pretend I don’t know them, and have a cocktail or two.